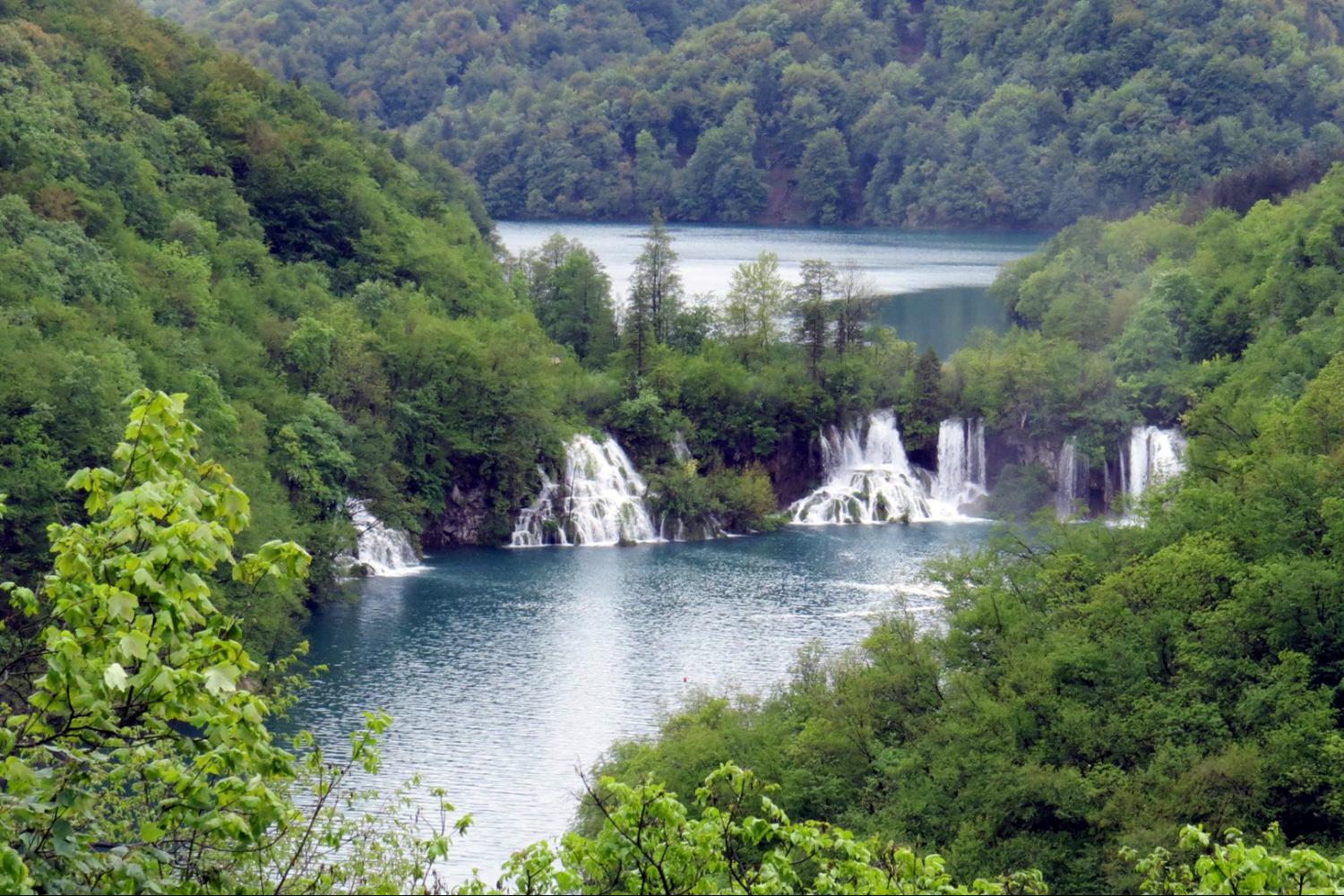 Northern Croatia with its Adriatic Coast, offers one of the most undiscovered and scenically dramatic walking landscapes in Europe. The country’s Northern coastline, with its relaxed Mediterranean ambience, offers an area rich in stunningly beautiful medieval towns, and villages, fantastic food, lush national parks, cascading waterfalls and sunshine! This spectacular walking holiday explores the very best of the Northern Adriatic Coast and its areas of outstanding natural beauty, including the national parks of Plitvice and Krka with their superb lakes, spectacular waterfalls and rich fauna. We start in the colorful capital, Zagreb with its busy market square, old quarter and stunning cathedral before exploring UNESCO Plitvice National Park with its cascading waterfalls and wooden walkways. As we head to the coast, we'll walk in the spectacular and undiscovered Velebit Mountains before heading to Paklenice National Park, a wild landscape of deep canyons and rugged mountains overlooking the islands of Pag, Rab and Kornati National Park, the second largest archipelago in the Mediterranean. After the splendour of the mountains we arrive on the stunning Adriatic Coast, with time to soak up the beauty of Krupa Canyon, before enjoying the laid-back atmosphere and beautiful architecture in Zadar and UNESCO Split, two of the Mediterranean's most welcoming towns with their busy harbours, laid-back pavement cafes, elegant promenades and excellent local restaurants. This Croatian walking holiday offers a chance to experience a totally different side to one of Europe's most spectacular destinations!

1.DAY ARRIVAL ZAGREB
Arrival in Zagreb airport and group transfer to our hotel in Zagreb. After brief orientation meeting with our guide and start our adventure with vwalking tour of Zagreb old town followed by a dinner together.
As the polit­ical, economic and cultural capital of Croata with 770,000 inhabitants, the city throbs with energy but has retained a good deal of old-world graciousness. The sober Austro-Hungarian buildings in the town centre house elegant restaurants and fashionable boutiques. The Lotrscak Tower was built in the middle of the 13th century in order to protect the southern city gate. For the last hundred years a cannon has been fired every day at noon commemorating an event from Zagreb's history. The tower may be climbed for a sweeping 360-degree view of the city. Near the tower is a funicular railway, which was constructed in 1888, and connects the Lower and Upper Towns. Maksimir Park is a peaceful wooded enclave covering 18 hectares opened to the public in 1794. It is the oldest public cultivated park in Europe with alleys, lawns and artificial lakes. We visit the Zagreb Cathedral, whose twin spires soar over the city. The sacristy still contains a cycle of frescoes that date from the second half of the 13th century. The side altar features a triptych by Albrecht Dürer.Our walk through the old town takes us to colourful St. Mark’s Church, with its unique tiled roof constructed in 1880. The tiles on the left side depict the medieval coat of arms of Croatia, Dalmatia and Slavonia, while the emblem of Zagreb is on the right side. Dinner on your own. Overnight at the hotel in Zagreb.
Accommodation:Hotel Jadran 3*, Zagreb or similar
Meals: welcome dinner
Walking/hiking: orientational walk in Zagreb
Transfer: single time group transfer from Zagreb airport to hotel in Zagreb, approx 30 minutes drive

DAY 2 PLITVICE LAKES
This morning we drive through the highlands of Croatia to one of the most magnificent natural sites in Europe, the Plitvice Lakes. Here sixteen lakes cascade from one to another in a series of waterfalls. Surrounded by dense woods, the region is a UNESCO World Natural Heritage Site. We wander the paths and wooden boardwalks which follow the succession of lakes and waterfalls where streams burst out of the rocks. Overnight at the hotel in Plitvice area.
Accommodation:Guest house Plitvica selo 3*,Plitvice area or similar
Meals: breakfast, picnic lunch
Walking/hiking: around 4-5 hours hiking in NP Plitvice, 11km, ascent 250, descent -250m
Transfer: from Zagreb to Plitvice lakes aprox 2 hours drive

DAY 3 THE NORTHERN VELEBIT NATIONAL PARK
Travel by vehicle from Plitvice to the Zavizan mountain refuge high in the Velebit Mountains. Near the refuge is a small botanical garden (botanički vrt) where you can observe a number of indigenous and endemic plant species before setting off on a hike along the scenic and superbly engineered Premužić Trail (Premužićeva staza). You’ll be hiking through the core of Croatia’s North Velebit National Park (Nacionalni park Sjeverni Velebit) on your way to the Alan mountain refuge where today’s hike ends. The trail winds through the limestone high country of the Velebit Mountains full of domed peaks, craggy pinnacles, and sinkholes—all characteristic features of karstic landscapes. Drive to Licko Lesce for overnight stay.
Accommodation:Hotel Gacka 3* in Ličko Lešće or similar
Meals: breakfast, picnic lunch
Walking/hiking:6 hours, 15km, ascent 430m, descent -580m
Transfer: from Plitvice lakes ot Zavižan aprox 2,5 hours drive and from Velebit to Licko Lesce aprox 1 hour drive

DAY 4 VELIKO RUJNO TO RAMICI
After breakfast 1,5 hour drive to Stoarigrad-Paklenica. Our luggage we wil store in the hotel and take a 1hour transfer to the high grassy plateau of Veliki Rujno. At a height of 900m, lies the small church of Our Lady of Rujno built in the past for local inhabitants who lived from cattle breeding, and spent most of the year in mountain hamlets taking their cattle out to graze. Over time, the church became too small and in 1930, due to the dedication of a local priest and enthusiastic mountaineer Don Ante Adžija, a new church was built using masonry from the old church. An annual procession held in August, sees hundreds of pilgrims make their way up the mountain to the chapel for mass. From here we start a hike to the Ramići where e overnight in a simple rural house in the hamlet of Ramici. Despite the lack of facilities and dormitory rooms, we are guaranteed a warm welcome and delicious home cooked dinner.
REMARK: clients will store their luggage at the hotel or in the vehicle and will carry just a backpack with toiletries and some spare clothes. Bed linen will be provided at the mountain hut.
Accommodation:overnight in rural house in Ramici village in dormitory room with common shower/WC
Meals: breakfast, picnic lunch, dinner
Walking/hiking:3-4 hours, 5,7km, ascent 258m, descent -585m
Transfer: 2 hours transfer from Licko Lesce to Starigrad 50 minutes transfer on mountain road

DAY 5 VELIKA PAKLENCIA TO STAROGRAD
Inhabited since prehistoric times, the dramatic landscape of the Paklenica National Park gained national park status in 1949, due to its unique natural features and magnificent forests. A dramatic mountain range that appears to fall directly into the sea, we'll spend the next two days on high trails, which offer spectacular views across to the lunar landscape of the islands of Rab, Pag and the Kornati National Park. We start our walk through the canyon of Velika Paklenica, surrounded by huge walls and the remains of old water mills. These ancient buildings, built in the 19th century and still in use up until the 1960s, are well preserved cultural monuments and maintained by the national park authorities. We follow a spectacular serpentine trial that ascends the western wall of the canyon as we finish our walk at the Manita Cave. This enchanting cave has been attracting visitors since 1937 with its stunning formations - the Helmet, the Organ and the Witch to name a few. After exploring the cave we return to the coastal town of Starigrad-Paklenica. The rest of the afternoon is free to enjoy a walk beside the sea or just relax with a drink in one of the many pavement cafes or local bars.Accommodation:Hotel Vicko 3*,Starigrad-Paklenica or similar
Meals: breakfast, picnic lunch
Walking/hiking:4-5 hours, 8,5km, ascent 235m, descent -703m
Transfer: local transfer to the hotel

DAY 6 KRUPA CANYON
One of Croatia’s prettiest rivers is probably exactly tiny Krupa. Located just under the steep slopes of Velebit, this beautiful river stretches from the lovely spring all the way through a deep canyon where it meets Zrmanja – another beautiful karst river. Arriving to Golubic village we visit a local sheep and goat farm. After tasting local cheese and drinks we take a short walk down the hill to Kudin most – or The Bridge of Kuda – is one of the nicest places in the hinterland of Zadar. Actually, the place is call Deveterci for the 9 small cascades that make the place so magical. Kudin bridge has been built at the turn of the 18th to 19th century. Legend says that a young guy called Kuda wanted to be closer to his loved one at the other bank of the river. So he built the bridge from 12 arches out of travertine blocks, and just as many pillars. The last two arches are now damaged but Kudin bridge still stands despite time and high waters in the winter.
Drive to Zadar, the ancient capital of Dalmatia. The marble, traffic-free streets follow the old Roman street plan and still contain some Roman ruins and several medieval churches. Massive 16th-century fortifications still shield the city on the landward side, with high walls running along the harbour. Zadar was part of Italy until 1947, and, though fast diminishing, one still finds Italian influence. We also see the Roman Forum which was constructed between the 1st Century BC and the 3rd Century AD, and the circular 9th Century Church of St Donat, one of the most outstanding monuments in Dalmatia. The sarcophagus of St Simeon is a masterpiece of medieval goldsmith work. Commissioned in 1377, the coffin is made of cedar and covered inside and out with finely executed gold-plated silver reliefs. Dinner on your own, guide will help with suggestion. Dinner on your own.
Overnight at the hotel in Zadar.

DAY 7 NP KRKA & SPLIT
Breakfast, drive from Zadar to national park Krk the most beautiful karstic river in Croatia, occupies the area between Knin and Skradin; deep canyons are carved in limestone plateaus. First we hike among many waterfalls, up to Skradinski Buk, the we take a boat to waterfall Roski Slap; between these two wonderful waterfalls is located Visovac Lake and the Franciscan monastery, which is located in the point where river enter the lake. From Roški slap we hike upt to Ožiđana pećina and then to Stinice. Drive to Split where we will spend our last night of Croatian hiking tour. After check in to hotel we take a walking tour of old town. Dinner on your own. Overnight at the hotel in Split.
Accommodation:Hotel Slavija 3*, Split or similar
Meals: breakfast, picnic lunch, farewell dinner
Walking/hiking:4-5 hours, 12 km, ascent 316m, descent -258m
Transfer: from Zadar Krka 60 minutes and from Krka to Split 60 minutes drive

You have not entered all of the required information. Please select your desired pickup, or choose one of the other options on the list below


I will make my way to the central departure point listed on my voucher (and the Getting There section of the website).

If you have questions or are unsure of the location, please contact us after booking to arrange pickup. We will send you full contact details for the local office once you have booked.